Hey, did you know Uber cut their prices again?

You may be thinking that we got all angry and started a blog about price cuts where we intend to start a strike or labor movement from scratch. Perhaps we are going to charge everybody a monthly fee of $50 and I’ll pay myself 70% of it while riding a sled down a pyramid shaped from bullshit and named “Freedom”. Unfortunately I am too lazy/not a sociopath so that won’t be happening today.

Like many of you I heard prices were going to be cut on Friday. I braced myself for the impact. When they were posted the next day nobody could have expected them to be so steep across so many markets. I took a look at Harry Campbell’s spreadsheet and article of new prices on RSG (he spent his birthday making this spreadsheet lol) and found that the majority of markets are now below 1$ a mile.

Less than $1 Per Mile

Of the markets I looked at, 20 of the 28 listed were under $1 per mile on UberX. This doesn’t even account for the 20/25% that Uber takes in commission from these fares. I have a lot of trouble advising that anybody drive in a market where they are making less than a dollar per mile. I simply cannot see how it is profitable for anybody.

Lets do some really quick and ugly math for Los Angeles involving some rough assumptions;

$31.13 per hour is roughly the MAXIMUM a driver can earn an hour in Los Angeles under 100% utilization and NO Traffic.

Unfortunately there has not been “No Traffic” in Los Angeles since the motor carriage was invented. So you aren’t going to earn anywhere near $31.13 per hour unless there is dynamic pricing. Even if you are efficient in markets like Los Angeles and San Francisco you will still end up driving an unpaid mile for every mile you are paid. Even this is a generous characterization because on slow days or on long rides you will find yourself dead-heading all the way back to the busy zone. This means you get to double those operations costs of 30 cents a mile to run your vehicle.

This means that you are more likely going to Gross around $15-20 per hour on a good day in Los Angeles. After expenses it will be somewhere around $5-10 per hour. You are better off not driving. 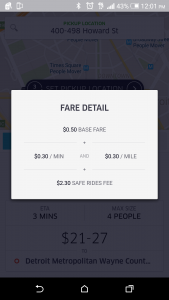 Detroit gets a whopping 30 cents a mile!

Detroit sees the lowest fares in the nation at 30 cents a mile. I can’t even comprehend how that is possible or what poor position someone must be in to find that worth their time. At this point I feel like its a slap in the face to one of the hardest places in the US to survive. There is no compassion or morality here. For Uber, its simple; desperate people will work for desperate wages.

Uber has guaranteed an hourly rate for drivers in cities with price cuts. Each is different and you can find them here on Harry’s spreadsheet that he compiled for RSG. The thing is that these guarantees are usually temporary in nature and seem to be far less than they were last year. Meaning Uber has set the bar low to meet them in order to justify keeping most of the lowered prices after winter. Further, most drivers know there is a troubled history in getting paid out for the guarantees. So I wouldn’t count on them as a long term plan.

These fares are not sustainable for anybody. At this point drivers are very clearly driving themselves into poverty. Nobody trusts rate cuts for a “limited” time. It is very clear that Uber is preying on the poor and desperate who need to generate some cash. Even for the drivers who are dumb enough to drive for these rates, they will not be able to operate their vehicles for very long before their repair bills mount up and they die off.

A lot of drivers will quit. There will be some surge when it happens. The surge will not be worth it and is not dependable on a long term basis. The golden age of TNC driving is over and at these rates it is the equivalent of a scam intended to transfer what little wealth/equity the poor have in their vehicles to Uber. Sure, some cities might do well but choosing to continue driving at these rates is going to seriously hurt you in a very bad way.

I cannot in good conscience advise that somebody drive for anything lower than $1 a mile. If you are in an affected area my advice is to do anything but drive for Uber.

One of my goals with writing for this site, along with everybody involved is to give it to you like it is. We will probably continue driving for a while since San Francisco is still a viable market (for now). So if you find yourself behind the wheel, you can count on us to give you some comedic relief on how ridiculous all of this is.