Since it’s inception, Lyft has done an amazing job developing brand loyalty by creating a fun culture for both drivers and passengers. Today the running joke amongst drivers is that Uber is considered “the dark side” when Lyft began to market itself as the more friendly option: after all, Lyft is “your friend with a car”. Lyft drivers were encouraged to greet passengers with a fist bump and pimp out their cars with the giant wacky pink mustache.

As a consumer, Lyft was a very attractive option in comparison to the taxi industry. It was touted that drivers got paid 100% of their earnings during “power hours” and the service was not only faster and reliable, but the consensus was that the person driving you was paid out fairly.

Ridesharing when first introduced was a millennial dream! The taxi industry was like McDonald’s, outdated and unhealthy. Lyft was fresh and organic like Chipotle who promotes from within.

Since 2014, everything has changed. Drivers in most markets have seen close to five price cuts.

The following screenshots are from my own earning summaries in the San Francisco market.

Its important to note that pre-tip, the ride earnings from the most recent screenshot are actually 13.16. The ride was also an additional 5 minutes longer, which at the recent price drop to .23 a minute, adds $1.15. After all the calculations, the earnings after the price cuts is $12.01. That is a decrease of roughly $8 from two years ago.

Unfortunately, the only recurring expense that has changed is the price of gas, but wear and tear, depreciation of a car’s value, and maintenance costs have not decreased.

Drivers are operating at a loss. Whether they are aware of it or not is a different question.

Lyft’s price cut is immediately on the tail of Uber’s new pricing. It is remarkable how reactionary Lyft is to its competitor. Uber has gained a sour reputation for how it treats most of their drivers so why is Lyft reacting in the same way? Companies should thrive to be industry leaders, but instead Lyft is playing catch up to Uber’s antics, devaluating its product and service along the way.

At rates of $0.88 per mile in Los Angeles, $0.71 in Fresno and $0.7o per mile in Detroit, is obvious that the bottom line has been met. These companies have been negligent towards the most important cog to their business: the driver.

Without the driver, there is no business. Unfortunately over the past 6 months to a year, its generally understood that the nickel and dimeing has made it more difficult for drivers to meet their goals, to pay their bills and to fix their cars. 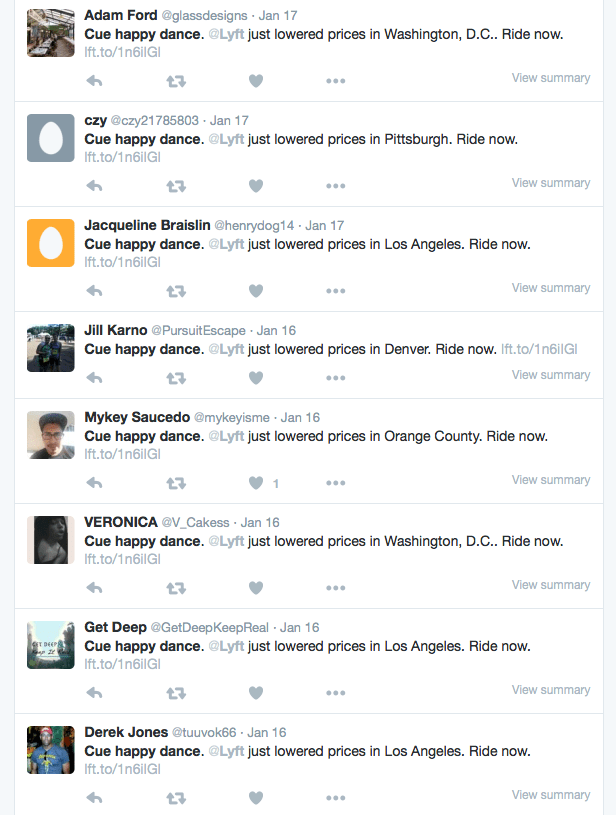 Lyft spamming Twitter, wanting everyone to do a Happy Dance at the expense of drivers

The most worrisome part is the reaction of a few loyal Lyft drivers. Their obtuse views of how well the company treats them despite the constant beating is not only shocking but decelerates the growth of the community. After several price cuts, glitches within the app that affect earnings, and weak driver and consumer support, drivers who stay loyal to Lyft aren’t victims of blind faith but rather, co-dependency. The argument that any driver is free to turn off the app is condescending and insensitive to the thousands of drivers whose livelihood depend on their cars. Drivers, encouraged by Uber’s leasing program and Lyft’s Power Driver Bonus guarantee, made an investment that at some point had great returns. Unfortunately, decisions made in the main office of both these companies devalues the status of “independent contractor” who has a say in his own work.

How to move forward?

As producer of RUN TUNC, I’m not trying to rally up the troops for a protest (though if there was one I would peacefully stand in support). Instead, drivers should evaluate when to stand together; it’s in everyone’s best interest to do so. Of course regulation brings bureaucracy, but there comes a time in every company’s existance when that needs to be introduced. Lyft and Uber have both grown so big that their experiments no longer affect only a small group of followers– it affects thousands of people who’s livelihoods are at stake.

There is a strong sentiment of lost and uncertainty invading the driver Facebook lounges and driver communities all over the country. Ultimately, if neither of these companies recognizes that without being able to pay drivers livable wages, they will lose faith in the company, faith in the mission, and will drive them off the road.