Last week, Lyft announced that they would be partnering with GM, who had invested $500milllion. This is on top of Lyft’s current $4.5billion valuation. This partnership opens up a couple new avenues for the rideshare company, including a network of car rental hubs for people to do short term rentals so they can drive for Lyft and make some extra cash. This has largely been overlooked because everyone and their Aunt Margaret is talking about Lyft and GM’s commitment to creating a network of driverless cars that people can hail rides from. This announcement is causing many veteran rideshare drivers to get their proverbial panties in a twist. The complaint: Lyft doesn’t care about drivers and wants to replace us with robots.

I am John Henry 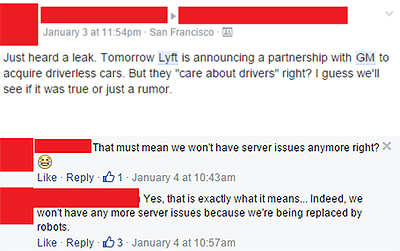 The thing is, this is a strategic move for future driverless car options. None of us are going to be screwed anytime soon, but the general consensus by a lot of people (who seem to lack critical thinking skills) automatically take this as Lyft phasing out all drivers ASAP. It’s comical, really.

You are not John Henry, and the autonomous car is not the steam powered hammer.

Here’s the thing; Autonomous cars are, by most calculations, at least a decade away from being safe enough for consumer use. Throw on top of that, the average person’s complete inability to relinquish control, because we’re all selfish assholes, and we’re talking much longer before we see widespread mainstream use of such vehicles. Here’s why autonomous (or driverless) vehicles won’t pass muster any time soon, and are, quite possibly, the stuff of sci-fi novels.

That last bullet point reminds me of something. Story time!

One fine summer’s day, while driving in San Francisco, one of our fine city’s many cracked out denizens walked in front of my car at a green light.  He seemed to be completely lacking any cognition of his whereabouts, and likely thought my car was a three headed dragon or some shit. I didn’t see him, until it was very nearly too late. I slammed on the brakes and came to a halt.  Then, in the midst of his zombie-esque stupor he literally bumps into the front of my car.

I shit you not, this guy paused, looked around to find the culprit of such a sensation, and stumbled onward through the intersection into oncoming traffic.  We’ll just say he wasn’t filing a police report anytime soon.

Let’s imagine for a moment that I was in an autonomous vehicle, reading my newspaper (who am I kidding, it’s totally a Reddit post, or Facebook) and this happened. What if there had been two crackheads, and only one occupant in the autonomous car?  Would the autonomous car slam into the nearest tree to save two lives over one? I’m no expert, obviously.  However, I believe that the necessary solutions to the innumerable scenarios to be considered are just not in place.

These things take trial and error, research, etc.; Not to mention the legal landscape that would need re-working to account for such situations. These things have been thought about by people much smarter than myself, and they’re still lacking consensus on what are the most viable solutions. By freaking out about the driverless car, we are putting all our eggs in one basket when it comes to finding a solution to our transportation problems.

Take off Your Tinfoil Hats

The conclusions this driver comes to:  Take off your tinfoil hat 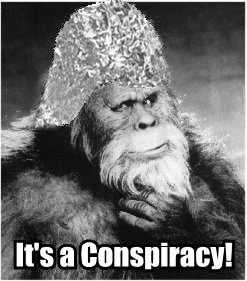 and think critically for a moment about a few things; How long it takes to achieve something so monumental (legal, engineering, gaining public trust). Your average Lyft passenger may not be willing to put their trust in a machine over a human.  Public bus drivers with preset routes are probably going to be the first to see the competition of driverless cars. So rest easy my little ones, the big bad robot car isn’t coming for us anytime soon.